An international case report, just published by the Ruhr-University Bochum over the weekend details the recovery of a little boy – who went from a vegetative state – with no prospect of recovery – to a walking, talking and smiling child – after treatment with his own cord blood. To download and read the full case report, click here.

The toddler (known as LB) was perfectly healthy before he went into cardiac arrest in November 2008 – which left him paralysed with severe brain damage and in a vegetative state. 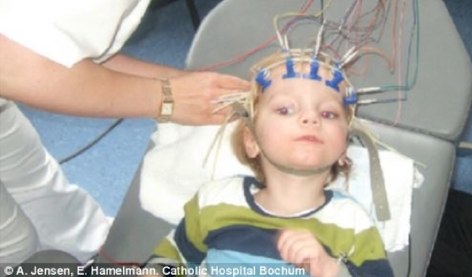 The prognosis for the little patient was described by his doctors as poor – with 40% of children in a similar situation dying and 100% in a permanent state of vegetative brain damage.

LB’s parents had banked his cord blood at birth and asked Dr Arne Jensen of the Campus Clinic Gynaecology (Ruhr-University Bochum) to re infuse it to treat his injured brain. He agreed and 9 weeks after the brain damage, on 27 January 2009, the doctors gave LB his cord blood back in a 40 minute procedure.

Doctors then monitored his recovery at 2, 5, 12, 25, 30 and 40 months after the treatment with cord blood and have published the results they saw. 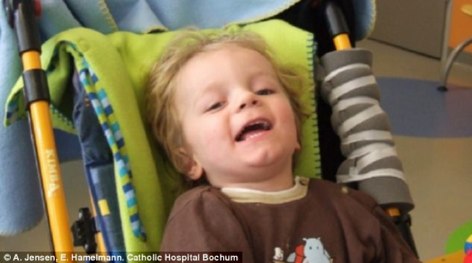 After being given an intravenous stem cell treatment – symptoms improved considerably

They describe LB’s improvement after treatment as “remarkable”- with the toddler becoming responsive after just 7 days after getting his cord blood back.

After 4 weeks he was able to reach out and touch an object and after 2 months his eyesight partially returned. He could also grasp, hold, bite, chew and swallow a biscuit, began laughing and could say the word “mama”.

By 5 months his EEG was normal, and he was able to point to his eyes, ears and nose on request. He could also clap and play again.

After 12 months he could sit unsupported and walk when supported – as well as playing  give-and-take games and be able to  name animals.

Two years after the treatment he could eat independently, speak a few words and understand many more. He could walk independently in a gait trainer and played imaginative games.

At 30 months he had an 80 word vocabulary and formed two word sentences.

40 months after the cord blood treatment, the little boy showed more improvement in speech and walking – with his vocab more than doubled. His ability to speak was better than it had been before he had the heart attack at 2.5 years old.

His doctors concluded that given the degree of brain damage and the persistent vegetative state he was in, it is unlikely that his recovery was due to rehabilitation alone.

They say the results reported should dispel any questions about the effectiveness of cord blood stem cell therapy. It supports the hundreds of reports from parents and specialists internationally who have seen this type of improvement in children treated with their own cord blood.

Around 800 children have received treatment with cord blood for brain injury in the United States, Germany, and Singapore.

Here in New Zealand, parents of Maia Friedlander, who was re-infused with her cord blood after her brain injury are not surprised by the results of the study.

The Friedlanders have also continued to see improvements in Maia’s speech and movement. It’s now been more than 4 1/2 years since her reinfusion and she’s still gaining new skills and speaking more clearly”.