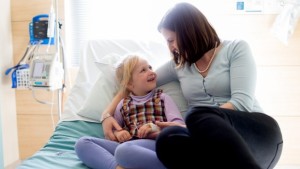 When Rachel Weldon, mother of 4 year old Isla, was asked why she banked cord blood she said – it just seemed like a good insurance policy.

“Now being involved in this trial we feel so grateful”

Researchers at Westmead’s Children’s Hospital hope that the cord blood, which is rich in immune cells, will help to reboot Isla’s immune system to prevent the condition, which occurs when the body attacks and kills it own insulin producing cells.

Isla’s family were chosen to be included because her half-brother has type 1 diabetes. She and her sister Ruby, 6, both had blood tests to look for antibodies in their blood that indicated the condition was developing.

Ruby was diagnosed with type 1 diabetes only days after her first blood test. Since then, Isla has had tests every six months and the medical team went ahead with the transfusion  after she went from having only one to three of the four possible antibodies in her blood that put her at a very high risk of developing the condition.

All the studies suggest she will actually develop it one day, so if we can stop that it would be fantastic,” said study leader Maria Craig. “I’m hoping we can completely switch off that autoimmune process and she will never get it.”

Another possibility is that the cord blood, and in particular the high amount of immune cells called T-cells it contains, will not prevent diabetes in the long-term, but will significantly delay the age at which Isla develops it.

“It could be many years while it dampens down her immune response,” Professor Craig said. “Even if it could delay it to adolescence, until she is older, that would be fantastic because that also buys us time for other therapies that are being developed.”

Professor Craig said Isla was the first of 20 children who would receive the transfusion.

Critics of private cord blood-banking  say they are concerned that parents who bank cord blood will never use it.

But Professor Craig said the evidence of the value of T-cells in conditions such as type 1 diabetes, heart disease, stroke and neurological disorders had only increased since the study was launched in 2012..