Skip to content
Four year old Maia Friedlander became a New Zealand medical pioneer when she became one of the first Kiwi children to have her cord blood re-infused for her brain injury. 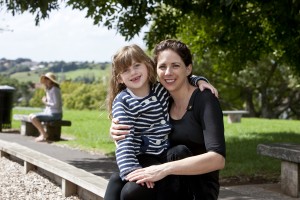 Maia with mum, Jillian in the park

Maia was less than a year old when parents Jillian and Daniel realised she was developing differently to her twin sister Arielle. She’d been deprived of oxygen at birth and diagnosed with a cerebral palsy-like condition which affected both her speech and movement. She had trouble with balance and was

severely restricted in her learning and development. It was hard for her to concentrate and she had very little speech.

Maia’s parents battled hard to help her in any way they could. In 2008, they became aware of a programme at Duke University in the USA, treating children for brain injury with their own cord blood. Because Maia’s cord blood was banked at birth she was able to get this treatment.

In August 2008, Maia was reinfused with her own cord blood at Duke by Dr. Kurtzberg, a leading paediatric oncologist.

The improvements came thick and fast and Maia, now seven and a year 2 student at school in Auckland, is still developing in leaps and bounds.

“When Maia first started with us she wasn’t able to work independently and needed constant one-on-one supervision to perform any tasks. Her progress has been absolutely phenomenal. She can now count, read, write and work on her own.”

Two years after her cord blood treatment, life for the Friedlanders is completely different.

“We have a real, active family which we are so thankful for.” “The two sisters interact and Arielle now has a proper playmate. They fight like most siblings which is actually wonderful to see!” says Jillian.

Jillian and Daniel are adamant Maia would not be making this progress without the cord blood re-infusion. “To every person who is pregnant I say bank their baby’s cord blood as you never know when you might need it.”