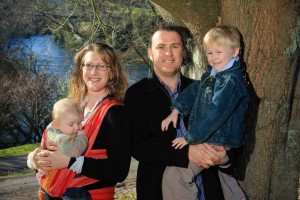 The O’Neill family from Cambridge are the first New Zealanders to take part in a ground breaking medical study into cystic fibrosis, thanks to the generosity of CordBank.

The O’Neills decided to bank the cord blood of their second son, Lenny, in the hope that it may one day be able to help treat his five year old brother, Liam, who suffers from the disease. As a result, they stand to benefit from the study which aims to prove that umbilical cord blood can successfully treat cystic fibrosis.

Monique and Sean O’Neill said, “We were approached by The Cystic Fibrosis Association to see if we would be interested in taking part in the medical study which is supported by CordBank, who are providing complimentary cord blood banking to New Zealand families who have a cystic fibrosis child and want to bank a sibling’s cord blood”.

“We are so relieved that we made the decision to bank Lenny’s cord blood and are thankful to CordBank for all their help. We are very excited about the search for a cure using cord blood, and want to do everything we can to help our son Liam and other cystic fibrosis kids benefit in the future”.

The Cystic Fibrosis Association approached CordBank to see if the company would be interested in providing free cord blood collection for up to 3 families who had a cystic fibrosis child and wanted to bank a sibling’s cord blood. Once Professor Bob Williamson’s team at the University of Melbourne’s Faculty of Medicine has proved that umbilical cord blood can be used to regenerate lung cells for children with cystic fibrosis, the stored sibling cord blood will be used to treat the brother or sister suffering from the disease.

“Most cystic fibrosis siblings will not have the mutation causing cystic fibrosis, and sibling cord blood has a one in four chance of being a perfect match that will not be rejected by the immune system of the child living with cystic fibrosis”, said Professor Williamson.

“However, the cord blood of cystic fibrosis siblings is too precious for us to use in our study, and we are able to do our work on samples donated by unrelated people who are not affected”.

“But thanks to CordBank in New Zealand, we are ensuring that affected families are banking precious sibling cord blood now so they are ready when a breakthrough comes.”

Professor Williamson emphasised that the breakthrough could still be several years away, however even at this early stage, there are positive signs the project is going well, and some lung proteins have been expressed in the cord blood cells in the test tube, “Cord blood is a very exciting resource, full of different kinds of stem cells.  These have already been shown to form liver, brain and skin cells, and they represent a real hope for people with cystic fibrosis now that we can add lung cells to the list.  We already know that umbilical cord blood is known to be safe and effective when used to treat childhood cancers and leukaemia, and we hope that cord blood will provide cells with a potential to rebuild damaged lungs in people with cystic fibrosis.”

“Cystic fibrosis is an expensive illness and families with a cystic fibrosis child can be placed under severe financial strain. People would be surprised at what the government does not fund in terms of the most basic medical equipment and support for these families”.

Cystic fibrosis is a life-shortening genetic condition, with no known cure at this time.  Many children with cystic fibrosis used to die in early childhood, but advances in treatment have extended life expectancy to 30 years and more.

The condition primarily affects the lungs and digestive system, causing a build up of thick sticky mucus in the body resulting in repeated lung infections and severely impaired digestion.  To keep healthy, people with cystic fibrosis must receive chest physiotherapy daily to keep their lungs free of mucus.  Regular antibiotic treatment, dozens of enzyme pills to aid digestion, and periods of hospitalisation are also a part of life with cystic fibrosis.