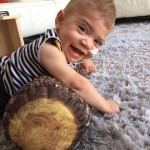 After little Phoenix Suttie suffered a brain injury at his birth in Auckland in 2012 – his mum and dad were told he would never walk or talk.

But his parents Jason and Arna refused to accept that outcome – at least not without a fight.

And because they had banked his cord blood at birth he was able to re-infused with his own cord blood just before Christmas last year.

Since then, Phoenix has stood for the first time and is now able to move around – as well make a laughing sound!

Here’s what Arna, his mum has to say on the Facebook page dedicated to sharing his story.

” Recently we have noticed three things which are a pretty big deal for us. He has been moving forward on the flat floor, he has been making a laughing sound and he has been smiling and reacting to the puppets on his DVD.”

He has always been given plenty of opportunity to do these things, however only started doing them toward the end of December. Which coincidentally is after his cord blood was reinfused.

You can keep up to date with Phoenix’ progress by following his page on Facebook.