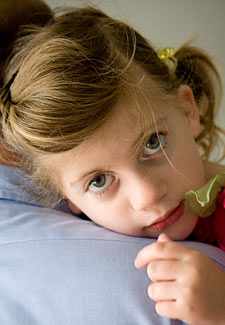 When four year old Maia Friedlander greets her dad with a hug at the end of the day it has extra special meaning for the both of them.

“Just a few weeks ago Maia wouldn’t even have noticed whether I was in the room or not,” explains Daniel “Now it’s clear she knows who I am and I couldn’t be happier.”

Maia, one of twin girls, suffered oxygen deprivation at birth which left her “disconnected” and developmentally delayed.

“We had speech therapists, physiotherapists, behavioural therapists and any other kind of therapy you can imagine working with her for up to 6 hours a day.”

Despite three years of dedicated effort – her progress was inconsistent and slow.

“We were facing a lifetime of therapy and no real promise of any improvement.”

But ten weeks ago Maia, and the Friedlander family got a second chance – thanks to a groundbreaking procedure pioneered by Dr Joanna Kurtzberg, a leading paediatric oncologist at Duke University in North Carolina, USA.

“We first heard about cord blood being used to repair brain injury when Mary Schneider, who was the first person to have the treatment for her son Ryan’s cerebral palsy, visited New Zealand in April this year.”

Three years on, Mary says Ryan is “clear of all issues, needs no more therapies, and is completely well – a typical five-year-old boy.” 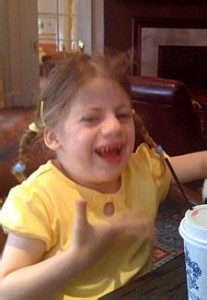 Maia the night before her cord blood re-infusion

“So Daniel and I were determined to get Maia into the Duke programme and we emailed and phoned almost daily for the next four months. We felt we had nothing to lose and owed it to Maia to see whether this could change her life too.”

Their persistence paid off.

In late August, Maia and her mum Jillian flew to Duke, to have the stem cells her parents stored with CordBank, put back into her blood stream via an intravenous drip.

“Once they’re in her system, it’s a matter of waiting for her cord blood stem cells to find their way to the damaged tissue in her brain and start rebuilding it.”

Jillian didn’t have to wait long.

Only two days after Maia’s re-infusion, her balance seemed to have improved.

“At first I thought I was imagining the changes, out of wishful thinking, but as every day brought more changes I realized I was witnessing our very own miracle.”

“Her eyes became more focused and alert, she could run with confidence and she even started talking – things she simply hadn’t done before.”

“On the plane trip home she had the concentration to colour in all by herself – for the first time ever.”

“When we got back to Auckland, only 7 days after the treatment, Daniel was stunned by the changes and said it was like I had brought home a different child.”

“It was as if the reinfusion completely “unlocked” the door on her personality and her physical development.”

The Friedlanders family doctor, Dr Marcus Stone, who has known Maia and her twin sister Arielle since they were born is amazed by Maia’s improvement.

“I was so delighted by the changes I’ve seen in Maia since her re-infusion. Her l 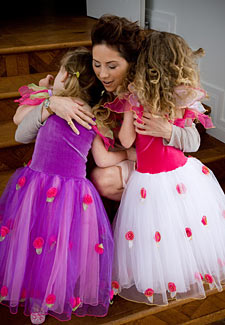 Maia with her twin sister, Arielle, and mother, Jillian

evel of awareness, the way she relates to other people and the connection she now has to what’s going on around is so much better than before she went to Duke.

Her behaviour is now much more age-appropriate and her concentration, balance and coordination are much improved. I’ve been her doctor since she was born and it is truly wonderful to see her improving to this extent.”

The Friedlander family believe that Maia was the 51st child to receive her own cord blood back for brain injury at Duke. Anecdotally all of the children concerned have seen some improvement in their condition.

“A month before Maia had her reinfusion, a little girl called Chloe Levin from Denver, Colorado went to Duke for treatment for her cerebral palsy. Her family reports a 50% improvement in her condition,” said Daniel.

“Jillian heard that demand for the procedure has grown so significantly that the next available appointment is in 2010.”

“We’re so fortunate that we had the resources and determination to get Maia into Duke when we did.”

“What we know is that they worked for Maia.”

“We’d like to see the procedure available to families in New Zealand and are hopeful that it won’t be long before that’s an option. We know that CordBank is working with the medical community to see how that might be possible.”

Meanwhile Maia is now going to pre-school with her twin sister Arielle – which would have been impossible before the treatment. 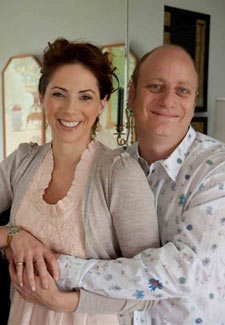 “She’s talking, playing and generally getting up to mischief with her sister – and we couldn’t be more thrilled. Maia’s had a second chance at life and we can now have the family life we’d alw

“It’s given Jillian and I our daughter back and, Arielle her sister back.”

“But when you have their cord blood stored you have options – and we have one message for the expectant parents of New Zealand.”

You only get one chance and it’s a decision you’ll never regret.”

Until Mary Schneider campaigned to have her son Ryan’s cord blood used to treat his cerebral palsy in 2005, umbilical cord blood had mainly been used to rebuild childrens’ immune systems after cancer treatment. Since then it’s increasingly being used in regenerative medicine – which use the body’s own stem cells to cure failing impaired or injured tissues. In the US, expanded trials using a child’s own cord blood as treatment for cerebral palsy and traumatic brain injury, are expected to begin enrolling patients shortly. Clinical studies for infant stroke, hearing loss and spinal cord injuries are expected to launch in 2009.

Does Your Child Have A Brain Injury?

CordBank is currently in discussion with a range of medical professionals to see whether the therapy Maia received can be provided for other children in New Zealand who have access to their own cord blood.
If your child has been diagnosed with one of the following conditions

and you have their cord blood banked with us, please email us at [email protected] with the following information.

Until now there was no way to repair damage to brain tissue. However using stem cells from a baby’s own cord blood is playing an important role in inducing healing with nerve and brain cells, just as they did in Maia Friedlander’s, Ryan Schneider’s and Chloe Levin’s case.