A year after tragically losing their two-year-old triplets in a fire in a Doha mall, local family Martin and Jane Weekes welcomed their new babies into the world. Born on July 30, the twins were a very special addition to the family and their arrival was celebrated by us all. 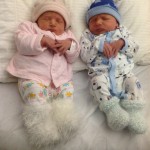 Proud father Martin described their delivery as a “relief “.

“We’re so pleased that they’ve been born healthy and safely because it’s always a worry. I guess probably more so for us because of having lost Lillie, Jackson and Willsher.”

Just as they did for the triplets, Martin and Jane have banked Poppy and Parkers cord blood as a safeguard for their future.

“The life of every child is priceless, and as parents we all want to do the utmost for our children.  When they are born the last thing on our minds is that they won’t be with us forever.

When we were pregnant with our triplets Lillie, Jackson & Willsher we decided to bank their cord blood in case they ever developed an illness that could be treated with their own stem cells.   The true value of our cord blood is only just becoming understood, and everyday medicine is learning new things about its potential.  However we only have one chance to secure it for our children’s future. Sadly we tragically lost Lillie, Jackson and Willsher when they were just 2 years old. 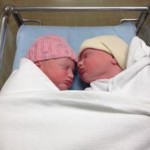 Poppy and Parker at just a few hours old

When we became pregnant with our twins Poppy & Parker we both had no doubts that again we would bank their cord blood. No parent should ever face the pain of losing a child and now more than ever we would do anything to have them with us for the rest if our lives and many years beyond.

Like any insurance policy we hope they never need it, but if one day they do we’d hate to have missed making this valuable investment in their lives.

We also hope that Lillie, Jackson and Willsher’s cord blood can be used to help someone else in the future.  Whether that be one of their brothers or sisters, or be donated to another seriously sick child it would be so incredibly special for that to be their legacy.”