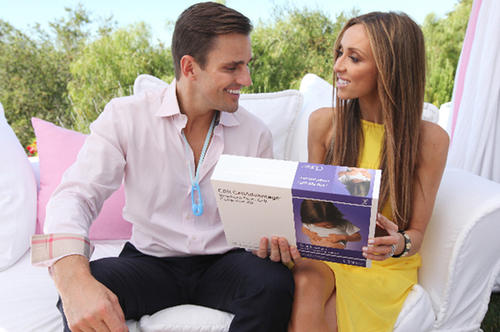 E! News host Giuliana Rancic is joining a growing number of celebrity moms who have decided to bank their baby’s cord blood. After suffering with infertility followed by a breast cancer diagnosis in 2011, Giuliana and her husband Bill made the decision to store their child’s cord blood. The couple was given their blood banking kit during their baby shower and Giuliana tweeted about their decision, mentioning her sister Monica who also did cord blood banking.

“So thankful 4 all the fab baby shower gifts!” Giuliana tweeted. “Looking forward to banking w/@CordBloodRegistry like my sister did!”

Giuliana is actually an ambassador for Cord Blood Registry and further explained her reasoning with a statement on their website.

“Cord blood banking with CBR is the best baby shower gift because Bill and I, just like any parent to be, want a healthy future for our family,” the statement reads. “Many people have a family history of diseases that can be treated with stem cells. We want other pregnant women out there to get educated on the importance of banking. It is so important!”

Other celebrities have decided to do cord blood banking include Ugly Betty star Ana Ortiz, who said it gave her “peace of mind.” Tori Spelling and Kourtney Kardashian were also spotted holding the banking kits, however they have never publicly spoken about it.