Read the complete stories in the March/April 2008 issue (PDF). 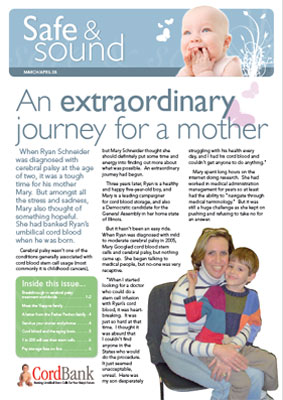 When Ryan Schneider was diagnosed with cerebral palsy at the age of two, it was a tough time for his mother Mary. But amongst all the stress and sadness, Mary also thought of something hopeful. She had banked Ryan’s umbilical cord blood when he was born. Watch video interview with Ryan’s mother about his cord blood treatment success.

Androulla and Ioannis Yiappos and their beautiful new addition to the family, baby Anthoulla, are our October promotion winners.

A Letter From the Parker Pechan Family

“I recently received your newsletter with news of international developments and stories from New Zealand. I want to share our story as I think we may also be one of your earlier adoptees of cord blood banking.”

CordBlood And The Aging Brain

When human umbilical cord blood cells were injected into aged laboratory animals, researchers at the University of South Florida found improvements in the microenvironment of the hippocampus region of the animals’ brains and a subsequent rejuventation of neural stem/progenitor cells.

New data published in the March issue of Biology of Blood and Marrow Transplantation indicates the probability of an individual in the United States needing a stem cell transplant, using either one’s own stem cells or those from a donor, is much higher than previously stated.

To make it easier for you, you can now pay your annual storage fees online via credi card.